On the occasion of the commemoration of the liberation from National Socialist tyranny 77 years ago commemorated in front of the Jena City Church Lord Mayor Thomas Nitzsche together with members of the City Council and citizens of the city.

"Today's Remembrance Day cannot be celebrated without raising awareness of Russia's war of aggression against Ukraine, which has been going on for two and a half months. Even if the end of World War 2 in Germany cannot be commemorated separately from the current war in Ukraine, let us avoid that the condemnation of the current aggression leads to a disregard for the victims and achievements to defeat Nazi Germany 77 years ago."

Nitzsche recalled that already in 1945 the Ukrainian people, as part of the Soviet Union, had to pay by far the largest blood toll:

"Ukraine had to mourn at least eight million war victims, other sources speak of a total of even more than 10 million victims, including more than five million civilians, women and children who were murdered in the German war of extermination by the SS or the Wehrmacht. These horrific numbers also include 1.6 million Jews killed by Nazi bullets in the often under-reported Holocaust in Ukraine."

"Ukraine lost a quarter of its population in the German war of extermination. Out of some 40 million war dead in Europe, every fifth victim was a Ukrainian. The human and material sacrifices of Ukraine in World War 2 become all the more painful, even infuriating, when one sees the images of the Russian war of aggression. The memory of the suffering almost 80 years ago, caused by German troops, and the suffering today are motivation to help. Here on the ground in our city, we can especially take in the people who have fled and offer them a home during the time of war. I am extremely grateful for the great willingness to help in the last two months!"

In addition, Nitzsche drew a picture of National Socialist penetration in the city's society in the years around 1945 and after:

"The National Socialist penetration of the city was multi-layered and deep, starting with the city administration, in Jena University, in business and industry as well as in clubs and associations and extending into the private family sphere. The end of the war in Jena was not a day of jubilation. Apathy and uncertainty about the future were widespread. This emotional state was intensified by the fact that the inhabitants did not know which occupation zone Thuringia would belong to in the future."

Fight against National Socialist ideas as an ongoing task

The mayor ended his speech by looking at the present and the future and a necessary and ongoing task for all people:

"The liberation from National Socialist tyranny, which took place with the collapse of the Nazi regime in the spring of 1945, does not equal liberation from National Socialist ideas. This struggle remains with us as an ongoing task. The fight against inhuman values, against anti-Semitism, against racism and discrimination and for our democracy is an ongoing process. We, the democrats, must stand up for the basic values of our society, starting from the dignity of every human being. With this awareness and intention, let us keep alive the day of liberation from Nazi tyranny and the end of the Second World War!"

After his speech and a joint minute of silence, Lord Mayor Thomas Nitzsche laid a wreath in front of the town church together with the chairman of the town council Jena Thomas.

The speech in the wording under "Downloads".

Commemoration of May 8, 1945 in front of the city church in Jena 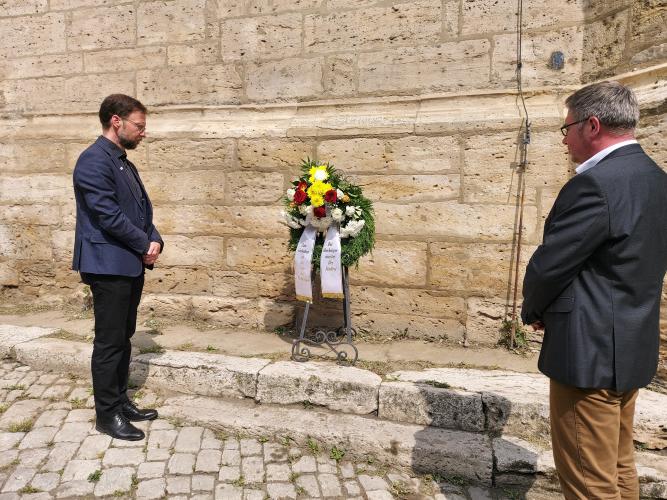 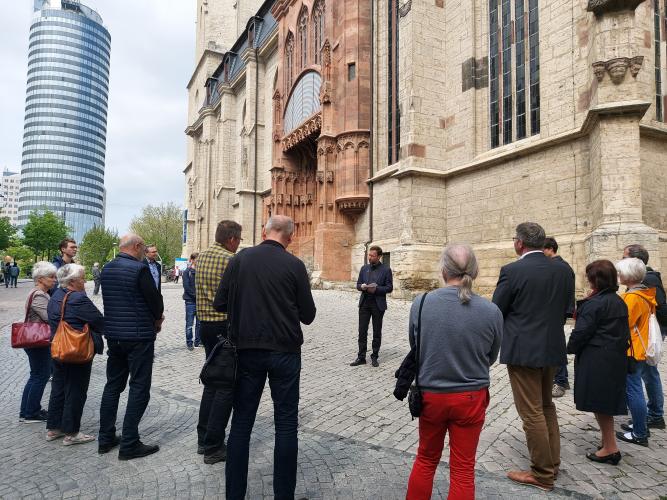 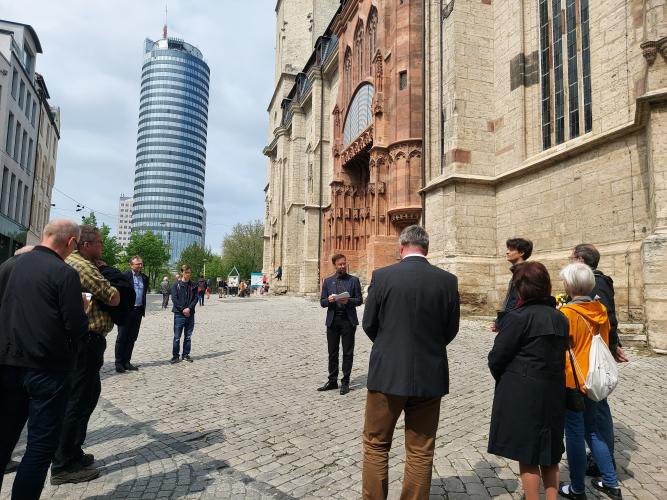